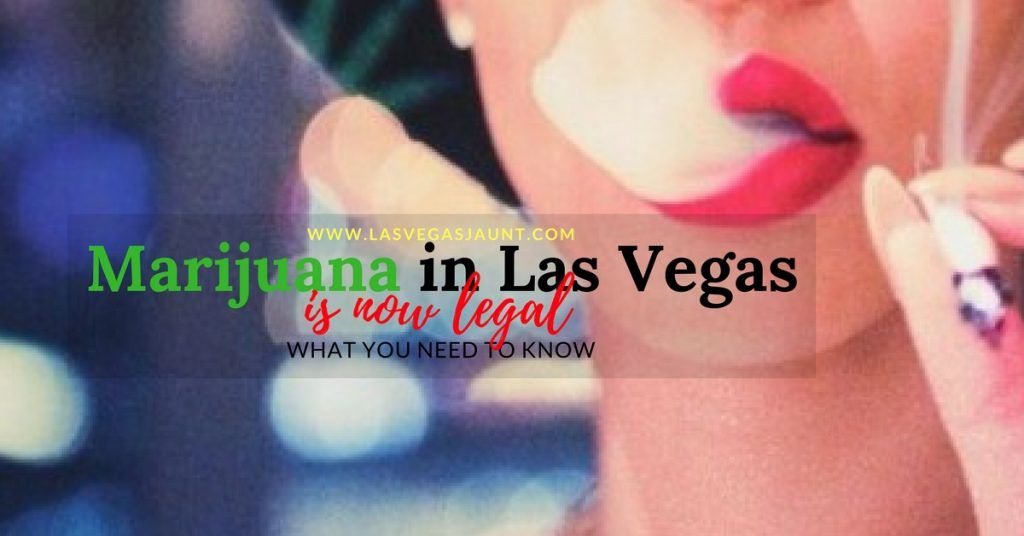 Marijuana in Las Vegas is Now Legal: What You Need to Know

This year, Nevada became the fifth state to legalize marijuana.

For visitors to Las Vegas, this presents an exciting opportunity to make their getaway a bit more fun.

But before you load up on rolling papers, there are some things you should know about Marijuana in Las Vegas.

Remember that laws are complicated and that being able to use it doesn't mean you can use it anywhere. And always make sure you know that what you're doing is OK.

Here's our guide to using cannabis in Vegas.

What You Need To Know About Marijuana in Las Vegas

While it's true that there's now more than one type of green that people will go to Vegas for, that doesn't mean you can get it anywhere or use it anywhere.

If you don't like the smell of marijuana, this is good news. You won't need to smell smoke while you're at a show or the craps table. But if you are a marijuana user looking to have a good time on the strip, you're probably a bit concerned about the specifics of the law.

Here's our look at the specifics of the new legislation.

If you want to buy marijuana in Las Vegas, you will need to go to a recreational dispensary.

Make sure you do this. While the prices will be steep there, they're steep due to taxes and fees. Comparatively, if you buy marijuana on the black market, you're likely to cause yourself some problems.

There are two reasons for this.

The first is that cannabis purchased illegally is less safe. Particularly if you're a visitor to a city, you have no idea what you're getting from a street drug dealer.

It could be a relatively benign problem. Maybe you're being sold oregano or another herb. But there's also a severe likelihood of something more sinister happening.

It is not entirely unheard of for marijuana to be laced with other drugs. If you smoke something that's been laced, you're likely to run into two problems.

The first is the problem of whatever you've ingested. While ingesting marijuana in Las Vegas is legal, ingesting the drugs that your marijuana was laced with is not.

The second is the problem with whatever you do after smoking marijuana that has been laced. One of the most common drugs to lace marijuana with has been PCP.

You've probably seen the movies. While Hollywood exaggerates on just about everything, the dangers and effects of PCP are far from a special effect.

Accidentally ingesting this substance can result in psychosis and violent behavior. In some cases, people who have accidentally used the drug have had to go through temporary psychiatric commitment.

So don't be a fool. Only buy marijuana in Las Vegas from legitimate sources.

Nevada state law prohibits the smoking of marijuana in bars and casinos.

These laws make sense. As much as marijuana advocates like to point to the drug's lack of adverse health effects, use of the drug creates an intoxicating smoke.

Even a small amount of this can lead to people getting high without their consent. Second-hand smoke of any kind is a problem.

Furthermore, marijuana has a very distinctive smell. Some people like that smell. However, the people who run craft cocktail bars probably don't want the smell interfering with the taste of their creations.

In addition to bars and casinos, you also cannot use it in restaurants, parks, or concerts. The use of marijuana is also prohibited in any territory held by the federal government.

Legally, that leaves a lot of places to smoke marijuana in Las Vegas. But that doesn't make it permitted.

The owners of many establishments may ban or restrict the smoking of marijuana. This is particularly true of hotels. At the very least, it is likely that you will not be allowed to smoke it indoors.

Not following this rule can result in a fine at the hotel's discretion. It can also result in being kicked out of a hotel. So always look up the rules and ask.

There are a variety of potential penalties for not obeying laws regarding the use of marijuana in Las Vegas.

Using marijuana in public can result in fines, though it's unlikely that tourists will face any hard time for it.

In addition to legal penalties, you'll need to worry about both short-term and long-term private consequences.

Regarding short-term consequences, most Las Vegas hotels are not allowing visitors to use the drug. If you are caught using it at a hotel, you can face either a fine or a quick removal from the hotel.

If you are staying at an Airbnb or another rental unit, you'll need to check with the person renting to you. As with hotels, you can find your stay cut short even if you are using a legal drug.

In addition, just because you're using marijuana in Las Vegas doesn't mean it will stay in Vegas. In fact, cannabis can stay in your system for over one month. If your employer drug tests you, they would be within their legal rights to fire you.

This is true even if you were not breaking the law when you used the drug.

Maybe the thought of a Vegas vacation has always floated in your mind. Maybe it just came to you when you learned about the legalization of marijuana in Las Vegas.

Either way, you may be worried about the price of the vacation. Visiting Las Vegas can be expensive.

We provide discounts and promotions for tourists to the city. We also provide advice for people looking to have a good time without breaking the bank.

For some advice, check out our budget guide to Vegas. And if you want to start saving money, take advantage of our VIP deals.

Las Vegas Reopening After COVID-19: Everything You Need to Know
Copyright © 2020 Las Vegas Jaunt
We use cookies to ensure that we give you the best experience on our website. If you continue to use this site we will assume that you are happy with it.Ok